After Bodine scored their record deal, things took off. A management was appointed, radio jingles were recorded, photo sessions took place and the band started touring.

The band members believed sacredly in their music and were quite dedicated. They coined the term 'Bodinism' in interviews, expressing their belief in their own musical course. It was a tongue-in-cheek expression, suggesting that Bodine's music would be spread like a gospel. The band members were not affected by the criticism they received as they started playing on stage. Alfred Lagarde and later on Hanneke Kappen aired several songs of Bodine in their shows and invited the band over when there was news to be shared with the audience--such as changes in line up and new record releases. It was part of the campaign to make as many headbangers as possible acquainted to Bodine. 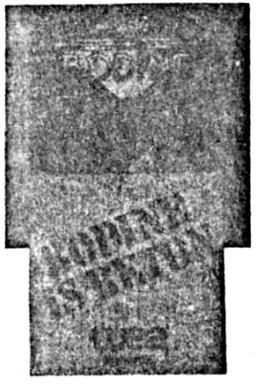 WEA/Rhinoceros
campaignIn February 1981, just before Bodine released their debut album, WEA records embarked on a campaign to promote the band. A campaign along the all readio broadcasting stations in Hilversum was organised. In the second week of January 1981, Bodine hired Gerard Du Prie, 1979 strongest man in the Netherlands, and a genuine concrete mixing truck to generate publicity for their first album. All radio broadcasting stations received a copy of it, held in a concrete brick, to emphasize the heaviness of the music. In addition, WEA spent some money on a couple of ads in music magazines. At least nine album reviews were written by several magazines, including national news paper de Volkskrant--quite an exceptional feat for a band making hard rock music.
Bodine were allowed to introduce themselves to the public in Betonuur, Alfred Lagarde's national radio show on Tuesday afternoons. Gerard Haitsma, Jay van Feggelen, Armand van der Hoff and Rheno Xeros were invited to fill an entire hour with music and interviews. 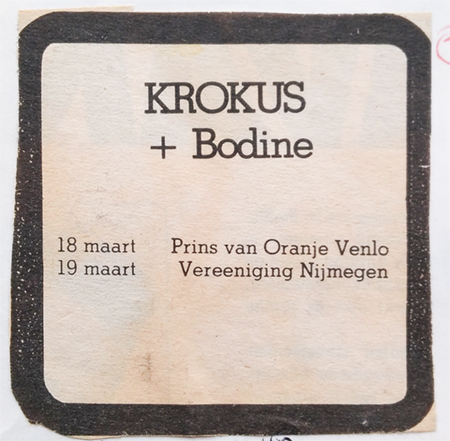 1981 March 11, OOR
concerts with KrokusIn the same period Bodine started to tour The Netherlands and performed live on stage. From February until October 1981, thus far 42 gigs have been documented.