There are at least five agencies known to have managed Bodine between October 1979 and July 1984, a time span of less than five years. The first management of Bodine was called Rockmart. Judging by the telephone number, they were based in the Amsterdam area. Apart from the fact that Rockmart managed seven bands, nothing else is known about them. Among the other bands managed by Rockmart was Inside Nipples, one the of the first Dutch punk bands. The Silver Dollar Band referred to in the ad is probably the country rock band that became known in the Arnhem area. Most of these acts kept an underground status. The ad was printed in Oor Magazine no. 21 (published on 17 Ocober 1979).

The next manager of the band was Mick Froeling, who also managed Achterhoek rockers Normaal. The first time Froeling avertised for Bodine in Muziekkrant Oor was on 5 November 1980. Co-operation with this agency did not go very smoothly. Due to a misunderstanding between the band and the manager, Bodine arrived four hours late at a concert on Sunday 8 March, 1981. Not a very pleasant entry for a band, when you bear in mind that the crowd has been gathering to see a show a couple of hours earlier. On another occasion, the band arrived at a festival one day after their gig should have taken place. According to Gerard Haitsma, the management had given them the wrong concert date. Allegedly after this incident, the relationship was ended.

Mick Froeling resumed to managing Normaal and he still works in the music industry for The Production Factory, where he is involved with technical supply for stage events.

The next management was called D.R.M. (Dutch Rock Management) and it was located in Horst at the time Bold As Brass came out. The only trace found thus far to this agency was a single ad that appeared in Muziekkrant Oor on 12 June 1982. From the ad it becomes clear that Bodine shared this managment with Accept for a while.

In an interview with Aardschok, Gerard explains that a planned US tour with Accept fell through as Accept demanded to be allowed to take their own stage gear across the Atlantic. The US operater, which had loudspeakers and amplifiers of their own, did not agree to this condition, as it would raise the expenses of the tour. Yet, at least one of the gigs was already planned. It remains unclear how many other cocnerts were scheduled for. Considering the fact that the New York Paramount event was planned in January 1983 it is most likely during the DRM-period when this happened. This was the closest Bodine came to touring beyond a 300 km distance from Den Haag.

It is unclear for which period Accept stayed with this management. It appears as if the co-operation was short-lived. Exciter in the ad is not the Canadian one. For a while, there was a Dutch band called Exciter as well. No further details were found thus far about DRM. 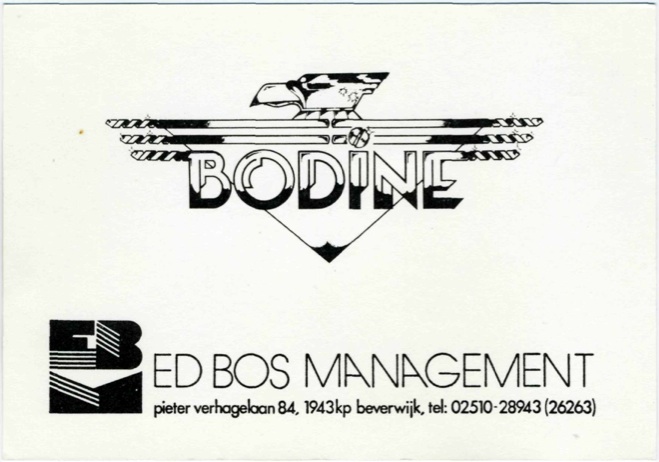 At the time of "Three Times Running", Ed Bos was mentioned as a manager of the band on the rear side of the sleeve. This agency is still around and, perhaps not surprisingly, manages blues guitar player Julian Sas and his band. Those who appreciate Bodine's first album may like Julian Sas' music style as well. Have a listen on Julian's website!

During the days that Bodine became disbanded, surprisingly a fifth management agency name popped up, namely the Moonshine management. The ad was released in the same issue of Oor Magazine as the news flash about Bodine breaking up. The news flash seemed premature, since Bodine would play their final gig three weeks later in Drachten.

Mike van Rijswijk, editor in chief of Aarschok Magazine, was responsible for the bookings in the concert period.

The frequent change of managements may be a plausible explanation for the stranding of Bodine's career in 1984. Five management chages in five years is not exactly good for continuity in career planning and building long term strategies. It is quite likely that opportunities were missed and leads were lost between manegement changes.

More opportunities were missed. According to Gerard Haitsma, Michael Schenker wanted to cover Rock Rosetta, but the owner of Rhinoceros records, Chiel Montagne, was against it. It would have meant some great exposure for Bodine. After Arjen Lucassen left the band in April 1984, there were several try-outs with other musicians who were either recruited or showed interest to play in the band. Apparently, there was no match between the musicians.

The income Bodine made from record sales and live gigs was not enough to sustain their living. They sustained jobs on the side and managed to rehearse a couple of time a week to prepare for live shows. Such an existence must have drained their energy.