Another new old gig date from 1983

3 February 2015: Martin 'Stunning' Stassen never ceases to surprise Bodine followers with freshly unearthed scoops. This one's still mouldy from the soil it was buried in: Bodine performed live on Friday 18 February 1983 at 't Bolwerk in Sneek, Friesland. Metal fanmagazine Loudness reported on the gig that Bodine held for about 100 metal fans (English version here, international Bodinist!). Since no other announcements on this gig were found in any other magazines, we must assume that the gig was a last-minute arrangement.

This revelation, again, brings about more questions than it answers. The bill shows Rampage, The Force, Battlefield and Hard Times more than five months before the band went into the studio to put them on record. Two unknown compositions, named Satan's Choice and Hard Rock Lover are on the bill as well. It's not unlikely that these were rough compositions that later appeared on IIITR in their finalised versions. But which ones? 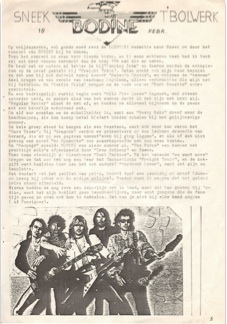 click image to go to Loudness MagazineIn the interview, Axel says that Bodine were going to get in the studio in two months time and that there were only rough song ideas... Quite puzzling, considering the 6 new titles on the bill! And what may have caused the delay in recording the next album?

We're assuming it's Armand van der Hoff's departure. Armand didn't feel comfortable any longer playing songs with devlish lyrics, the story goes. The band had to look for a replacement on the bass, before hiring a studio. 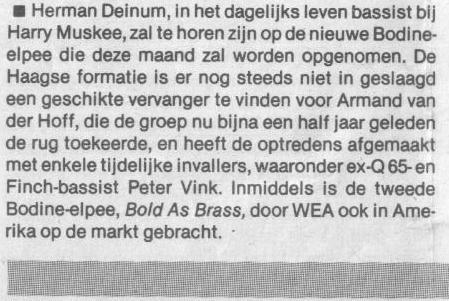 This didn't turn out so easy. Herman Deinum, bass player for Harry Muskee's Cuby and the Blizzards, was approached to stand in on the album. At least that's what OOR Magazine revealed on 15 July 1983. We know now that didn't work out either. Eventually, Iron Anthony and Rheno ended up playing the bass lines.

Another remarkable statement by Axel is that this was the first gig in three weeks for Bodine... Speaking of poor booking management... where they so hard to sell to the venue owners? The NWOBH was raging, there was a huge demand in new metal bands in those days, how come Bodine didn't succeed in getting on stage? Contemporary bands like Picture and Highway Chile performed twice as much!