There must be millions of rock and metal bands around the globe. But how many of the started out laying the foundation at a ballet class??

Enter Gerard Haitsma, a Dutchman who wanted to play the drums and improve his skills. In the early 1970's he had been in several bands, but he did not have a real idea where to take his musical career next. The only thing he knew for sure was that, to become a good drummer, he had to practice -- a lot.

One of the spaces he rehearsed at was a ballet school in his home town, The Hague. He accompanied the ballet classes on his drums, which gave him a chance to try various rhythms and volumes. After the lessons, he stayed to practice. He held the drum sticks at the thin end to play with more volume, finding inspiration in Jimi Hendrix, Vanilla Fudge and Cactus.

In that period, Gerard met a guitarist he instantly recognized as a great talent. The guy was playing electric guitar sitting on a chair, like a classical guitarist. His main influence was Jimi Hendrix and his name was Rene Rijsdijk. Since he was not affiliated to any band, Gerard felt confident enough to ask him to jam along during ballet hours. So they did.

They played several nights a week. Gerard: "I remember that late one night, in the heat of a jam session, a man came at the door, looking panic-stricken. He was dressed in his pajamas and cried: 'Oh no boys, not again, please!' After he had cooled down a bit, it turned out that he lived next to the rehearsal room. We had never realized someone was living so close to the space where we were practicing. It was time to find a different rehearsal place."

They found a rehearsal space in a utility room of an underground parking. Sewage pipes ran through it and when the music was down, they could hear bowel movements. It had no doorbell. Whoever wanted access, had to wait outside until the music stopped, then kick a green metal venting pipe that ran through the room to notify those inside.

"The rehearsing space was a rathole," Jan stated later in a radio interview, "it was a damp and unheated cellar below street level. We had to keep our coats on inside."

Several years of rehearsing followed. Armand van der Hoff was recruited as a bass player. Playing their own compositions from the very start, they developed a unique style and sound and became a tight team. The New Wave of British Heavy Metal, led by bands such as Motörhead, Iron Maiden and Saxon, had not yet reached The Netherlands. A band name was chosen: 'Doreen'.

As soon as they became convinced that they had developed some potential, Gerard, Rene and Armand advertised in music magazine OOR that they were looking for a singer. They used an Alibiphon, a contraption on which they had pre-recorded the intros of a couple of songs. Aspiring singers could call the number and get a taste, before deciding to give it a go.

Auditioning turned out to be a demanding effort, since none of the vocalists who auditioned fitted the musical style or personalities of the band. Gerard: "For Bodine, we were looking for someone special. We had an Argentinian who thought that the mike volume was too low all the time. „More power, man, more power", he kept yelling all the time. Eventually we placed him outside the rehearsal room with a long sound cable. There he could sing as loud as he wanted and we could turn his volume low again."

After numerous fruitless auditions, someone tipped them off about a singer with a great voice who lived in Amsterdam: Jan van Feggelen. Jan had released a single as a solo artist in 1976 under the name Solomon Kane (the Rolling Stones cover Connection, backed with the self-written I'm Gonna Quit You), but it failed to chart. Stints with Dutch bands like Crowdy Corner and Parklane did not lead to a breakthrough either and Jan had almost given up hope. Bodine changed this. 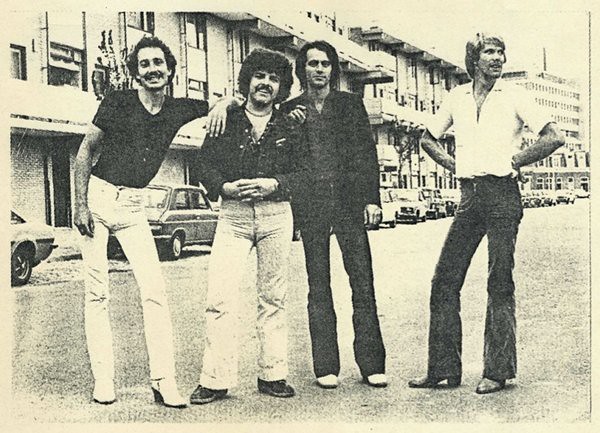 In an interview with OOR he admitted:

"After Connection flopped, I didn’t feel like making music any longer; I’d been active for such a long time and never made it. This is why I was so precautious with Bodine at first, but that has changed completely now. Bodine is the first band in which I feel at home. I can use all the lyrics that I‘ve written over the years in this band. With Bodine, I finally feel for the first time that I can sing what I believe, for one hundred percent. If we don’t make it with this band, I don’t know how we will."

Jan wrote lyrics to the compositions that the others had been playing before he joined. Being a baritone and a soul-oriented singer he was influenced by Otis Redding, Free and Bad Company. His singing is seasoned with moans, growls and howls.

Before joining, Jan suggested changing the band's name. The inspiration came after being introduced to a lovely lady from France in a bar in Amsterdam. 'Allo, I'm Bodean,' she introduced herself. Blown away by her appearance, it struck Jay that 'Bodean' had more potential than 'Doreen'. In a frenzy, Jay went to the nearest payphone, to call the others and share his revelation. It went down well, however, no-one thought of spelling the name and those at the other end of the line noted it as 'Bodine'. (from Bodine's debut remastered album sleeve)

In 1979 and 1980, gigs were done as support acts for Herman Brood & Wild Romance and Diesel, Dutch bands that had quite a following in those days. Gerard in OOR:

So we started to perform live. What a disappointment that was! Every time the sound was bad, we had little stage experience after all these years of playing in the basement, but worst of all: people thought our music sucked. Everyone we talked to thought it was worthless: club owners, the audience, managers, etcetera. That was annoying of course, but we believed in our music and went on twice as hard." 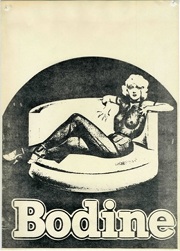 First flyer, probably
late 1979From then on, Bodine started to become concerned with their public image. In those days Gerard minded the writing and editing of a leaflet about Bodine. In the first version, probably printed in late 1979, each musician was still mentioned by his birth name. Their appearance bore resemblance to a funk and soul band. As a logo, a regular character typo was used.

Second flyer, probably
dated 1980 The second promo leaflet was presumably published in 1980, when Richard Cornelisse joined the band. He would only stay for a brief period and Gerard, Rene, Armand and Jan decided to stick together. In this new version of the leaflet, a logo was designed and Rene Rijsdijk and Jan van Feggelen took on stage names: Rheno Xeros and Jay van Feggelen. For Rene, a fake Greek identity was invented to attract the attention of managers and record companies and explain his eccentric style of playing. By then it had become clearly visible that Rheno was a talent of his own kind who could hardly be compared to any other rock guitarist around in those days.

If a founding date for Bodine had to be chosen, two moments would qualify: Either the moment Jay joined, or the moment that the band's name was agreed upon. The sources are not clear about this. Exact points in time will be shared as soon as they become clear. As long as no other evidence turns up, the founding year remains 1978.

Some demo songs were recorded on cassette in the rehearsal room. In those days, few Dutch radio hosts played rock music on their shows. One of them was Alfred Lagarde. He was a flamboyant deejay with a taste for new bands and not too shy to invite international acts to the studio. Bodine figured that if they could manage to get a tape into Alfred's hands, he might give them some airplay.

Gerard: "At some point in time we had recorded a few songs on tape, but we didn’t know what to do with them. Soliciting record companies seemed pointless, so the only person we knew who could probably help us was Alfred [Lagarde, RR]. We sent in our tape. Never heard back from him. Then I thought: I’ll just go to the NOS broadcasting station on a Tuesday, and I am not gonna leave before he listens to our tape. But you know, Alfred repeatedly said that he had no time, acting a bit like a jerk, but after a lot of insisting we went to listen to that tape, after his show was over. Alfred went berserk! He took the tape with him and we didn’t hear a word from him for a couple of months. We were beginning to give up on him, until we got a phone call. Three days later we were in the studio recording our first LP with Alfred and Okkie Huijsdens."

The studio was owned by Chiel Montagne, another radio- (and TV-) host who was convinced by the following Bodine had gathered and offered them a record deal. In association with WEA records a special label called Rhinoceros Records was set up and served as a vehicle to promote Bodine.

Okkie Huijsdens and Alfred Lagarde produced the first album. Okkie was a musical centipede who had earned his spurs as a musician, engineer and producer. Rens Benerink, a professional artist, designed a band logo with three stone drills on each side and an eagle's head on top. A photo-session was organized with the strongest man in The Netherlands, Gerard du Prie, posing before a concrete truck. To make an impression in record stores all over the country, samples of the record were sent along with a promo package that included some leaflets, stickers and a concrete brick to emphasize the heaviness of the music. 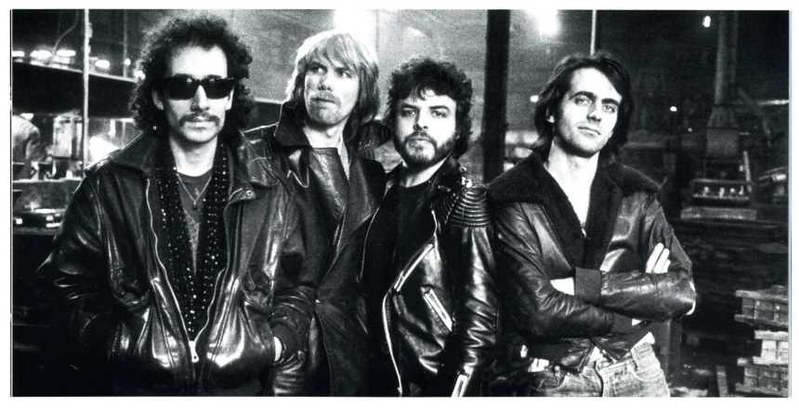